Neither massive competition successes but none the less important in Lotus development and in the commercially dimension of product development.

The editors identify a link of commonality between these cars and we highlight it below.

This article combines both the types 47 & 62 but we have a dedicated piece on the 62 with greater illustrations.

Although the original Europa was intended as a clubman’s sports racer to replace the Lotus 7, it was realised that the car would be uncompetitive with the Renault engines available. A decision was therefore made for Lotus Components to manufacture a specialist race car based on the Europa to be raced by Team Lotus and sold to private entrants. Although the very first Type 47 was based on a modified Europa, all subsequent cars were produced entirely by Lotus Components rather than the main factory. Launched at the same time as the S1 Europa, the body of the 47 was thinner than the standard Europa and with larger wheel arches. Side vents into the engine bay were added after the 1st few cars experienced problems with engine bay temperature.

The engine, gearbox and rear suspension were completely different from the standard Europa and were taken in their entirety from the Lotus 23/Lotus 22 Formula Junior with a Lotus-Ford Twin Cam based 165 hp (123 kW) 1,594 cc Cosworth Mk.XIII dry sump engine, and a Hewland FT 200 5-speed gearbox and suspension with reversed bottom wishbone, top link and dual radius arms. The front upright was specially cast in common with the F2 version of Lotus 41X to accommodate a larger Girling brake for the later 47A model (which had the Alfa Romeo tail lamp shared with the Europa S2) with reinforced front frame.

The Type 47 exact production numbers are unknown, the last car was 47GT-85 but it is unlikely 85 47GT’s were produced, estimates vary from 55 to 68 during the years 1966-70. Although the 47GT is the best known, a few 47F’s were produced, these had the detachable body similar to the S2 Europa, but retaining the large wheel arches and side vents of the 47GT. Fitted with a tuned Ford cross flow engine but with the Renault gearbox and rear suspension of the Europa. The number produced is unknown but probably no more than 6.

As a mobile test bed for the new 2 litre Lotus 907 engine being developed for the forthcoming Elite and Eclat, the Type 62 was produced. Only two such cars were ever made. These were space frame cars with F1 suspension to handle the 240 hp from the engine. Although deliberately made to resemble the Europa, in practice the only connection to the Europa was a few of the Europa’s body panels. It did win its first event the 1969 BOAC 500 at Brands Hatch with John Miles and Brian Muir at the wheel. Replica 47’s and 62’s are bespoke-manufactured by Banks Europa Engineering, in several variations. A one-off 47, fitted with a Rover V8 engine (3.5 litre enlarged out to 4.4 litre), was built for GKN in 1968 and registered, GKN 47D, with 300 hp it was capable of 180 mph (290 km/h).”

Interpretation: The Groups and Classes with the Competition and technical specification from Twite

Twite writing in 1971 [The Worlds Racing Cars] gives a potted history of the definition of the Groups. This is not easy because the regulations are confusing and changed so frequently.

Both the Types 47 and 62 are listed in the respective groups for his 1971 edition. Rather than attempt to unravel the complexity the authors thought there was some merit in listing the cars competing. This will perhaps better illustrate the competition that Lotus faced.

The types 47 &62 have an interesting connectivity going back through the Europa.

In our dedicated articles relating to Europa and The GKN 47 D Rover V8 we record that as early as 1963 Chapman was considering a family/range of cars that could have been tightly structured offering economy of manufacturing.

Ron Hickman and John Frayling contributed significantly to these.

We suggest that the types 47 &62 be explored partly in this context. 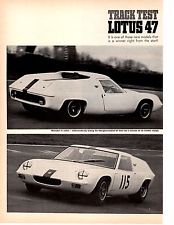 The type 47 brew out of the Europa which itself had an essentially race bred layout.

The 47 was adapted for racing as per usual weight saving was a major consideration.

The snorkel feeding the induction were a distinctive feature, rather prominent above the engine deck but also in line with F1 practice. [Rather different to that of the Lotus Mk.III. 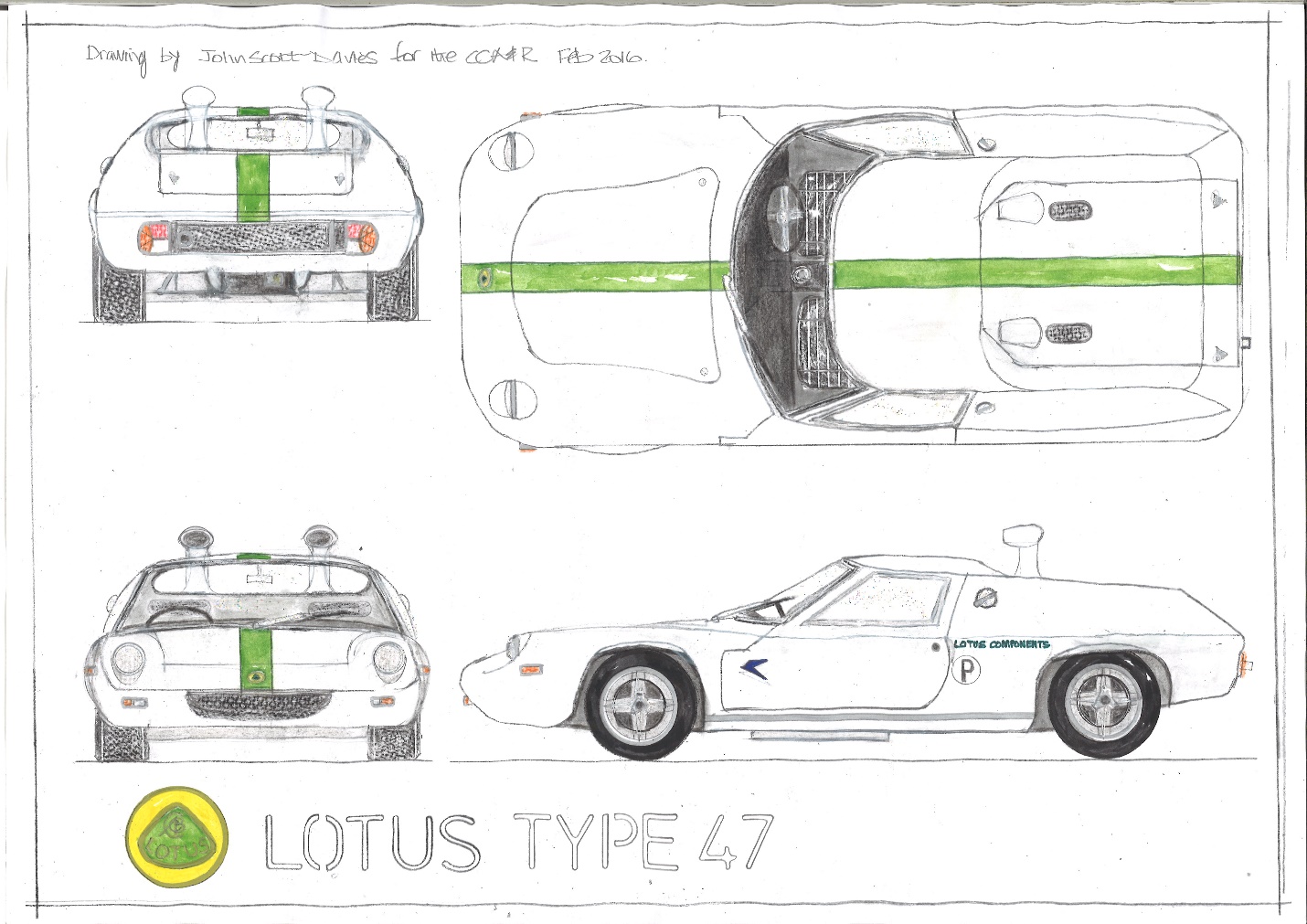 Figure 2.Editors sketch of the Lotus 47 with “snorkel”

“As was usually the case with new Lotus models, a racing programme for the Europa was set in motion with a special batch of cars built by Lotus Components, all equipped with twin cam engines. This “racing” Europa –the Lotus 47 made its debut at the 1966 Brands Hatch Boxing Day meeting when in the hands of John Miles……….it won the prototype class in a race for sports cars “

“at the same time, a competition version was built to publize the Europa and provide some competition for the mid-engine Ginetta which was starting to take over the Elan’s class in GT racing; and at the same time, giving Lotus Components something to sell in place of the out moded 26R.this was the type 47 which was first raced on Boxing Day 1966.”

Provides an excellent technical description of the 47.

The 47 was outwardly similar but intended for competition with 1.6 litres of fuel-injected Ford –Cosworth to give an adequate 160 bhp, transmitted through a five speed gearbox….

The 47 became familiar and successful, in the colours of Lotus Components, Gold Leaf and private owners, a T62 derivative, with substantially different body, was raced by Gold Leaf Team Lotus, but was generally less widely seen as Lotus’ racing was concentrated on Formula 1.” 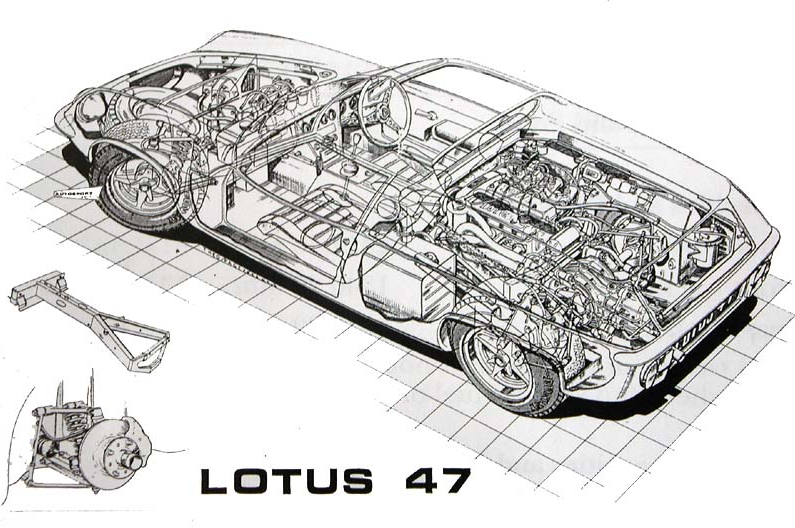 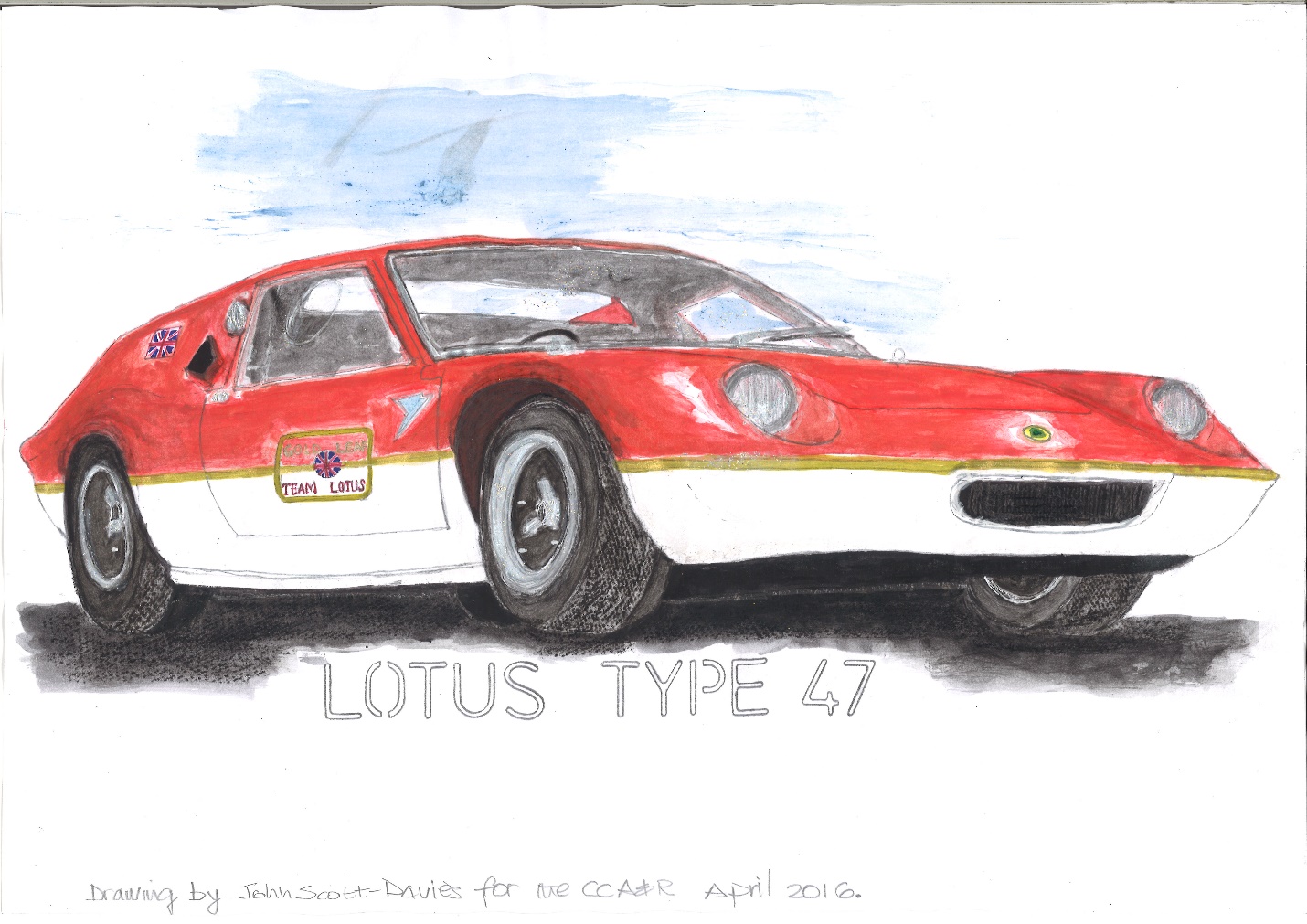 “Outside Britain the Lotus Europa 47 [including the 47|, with slightly revised suspension geometry and bodywork] has had little success. The main reason is that most sports car races have 2 –litre class not 1600 cc and the Lotus needed that extra 400 cc worth of power to be competitive. Some private owners fitted 2-litre Coventry Climax four cylinder engines, but no notable success was obtained”

Nb to comprehend this see tabulation of contemporaries above. 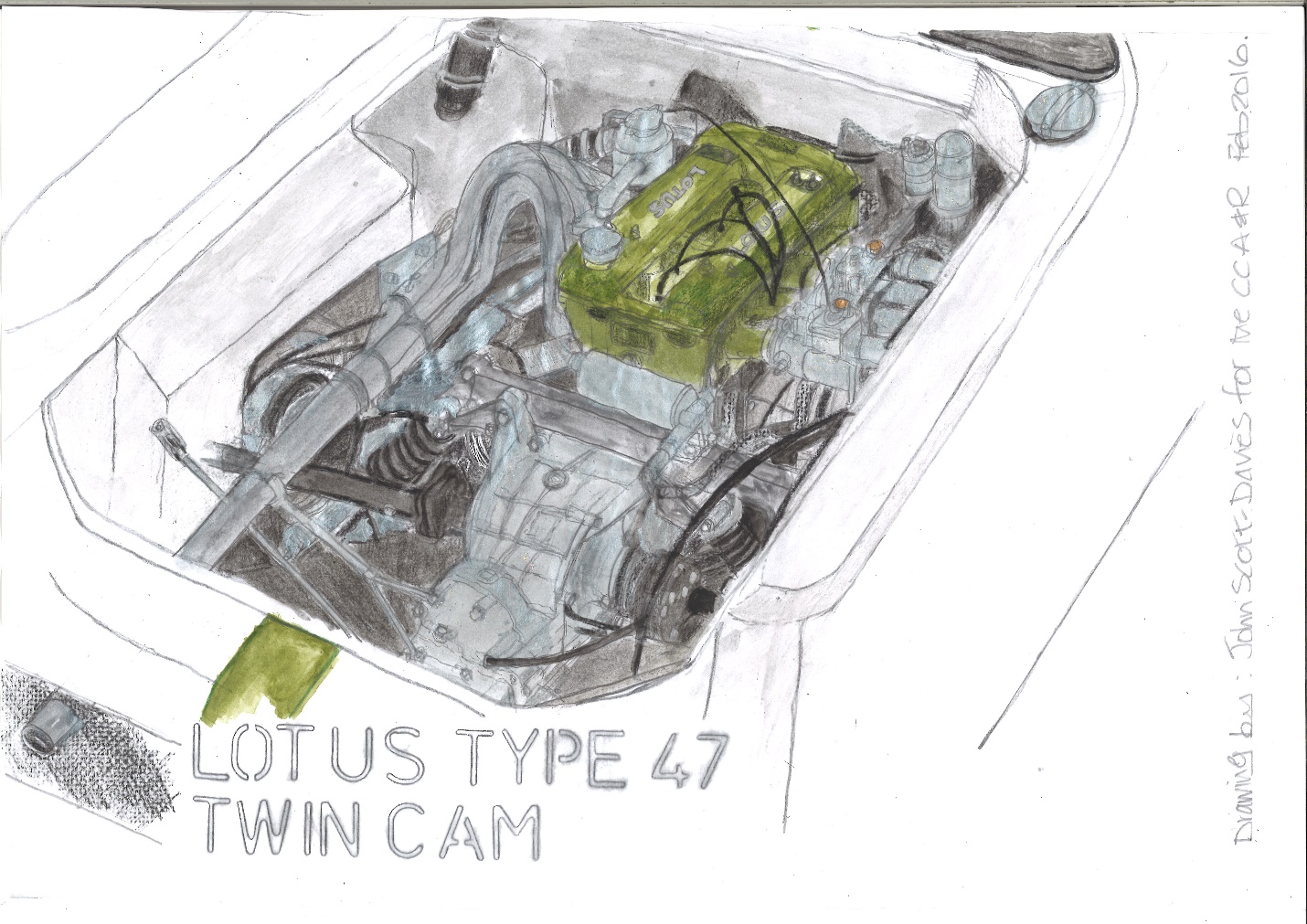 The editors have seen various numbers quoted from 30 to 55

Not a massive amount but sufficient to promote the Europa.

The type 47 deserved its own dedicated sales brochure, the A&R have an example. 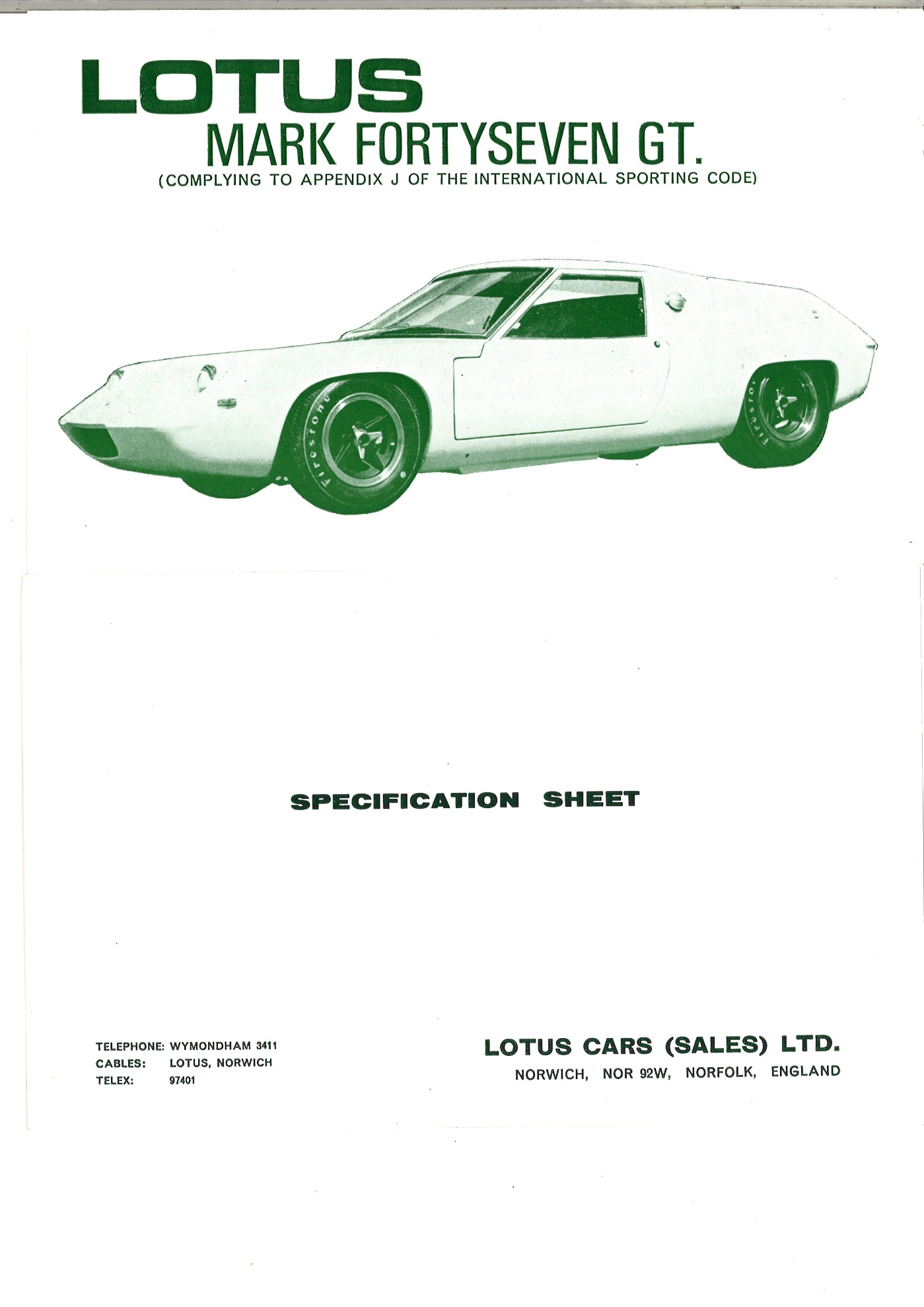 Comparative Analysis and Specification within the Group

“The most notable feature of the car was its engine, a Lotus design based on the Vauxhall Victor 2litre block and no doubt the prototype of a forthcoming road going unit. Known as the LV/220 [Lotus Vauxhall, 220 bhp minimum], the engine gave 240 bhp in racing trim and indeed has been renamed the LV/240 for 1970″ 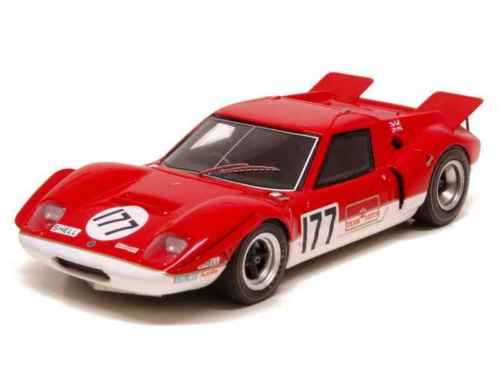 For these reasons our suggested outline Business Plan includes provision for promoting products and services which share Chapman’s ideals of mechanical efficiency and sustainability. In addition we propose merchandising that explain and interprets the social and cultural context of Chapman’s designs in period. It’s suggested there will be catalogue for on line purchasing. In this instance the following might be appropriate:-

The 47 and 62 are interesting in their commonality.

They played important roles within Lotus not least commercial.

They might be considered part of a family.They offered some economies and supported sales.

The type 47 was a good practical package. It was both quick and reliable. Produced in reasonable quantity to garner results in was competitive at club and international level.

The type 62 was valuable in accelerating Lotus engine development and its commercial dimension within the brand, reputation and independence.

The Lotus 62 therefore contributed to the engine that would power Lotus through the 70’s and 80’s and contribute to brand survival.