“Behind every successful organisation is always one if not more leading figure who eschews the limelight; in McLarens case this was Gordon Coppuck. He stood almost permanently in the shadows of the other more extrovert members of the team yet he more than played his part “…….. 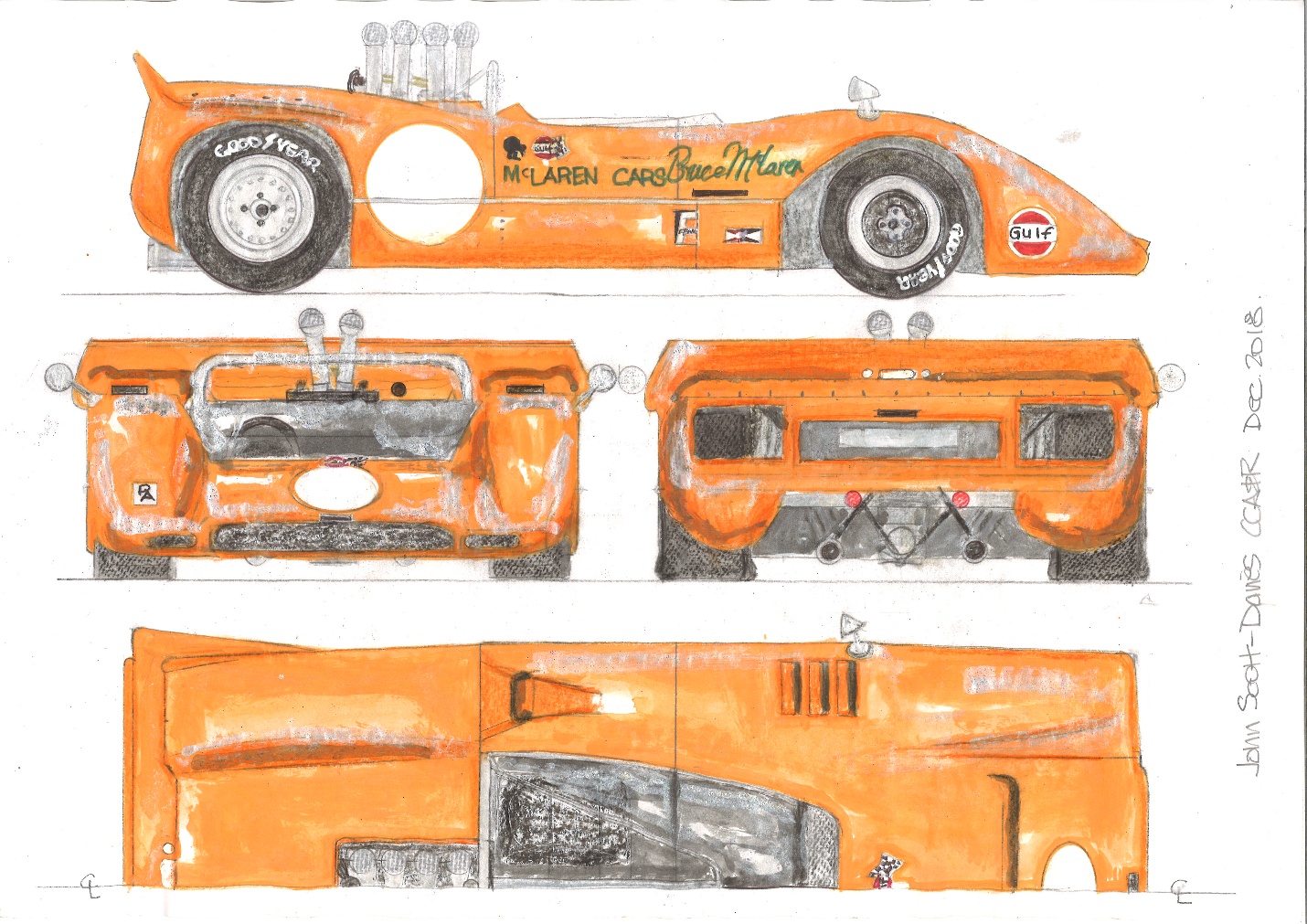 Figure 1. Editors sketch working drawing of the McLaren Can Am car

The FI designs of Colin Chapman were considerable not least because of his relatively low budget .He did not have the resources of a multinational to cross-subsidize its racing programme against publicity and a means of developing its engineers.

In order to evaluate Colin Chapman better the A&R is committing to a series of benchmarking exercises analyzing the design achievements of his peers .As part of the exercise we will examine some specific models from the respective seasons.

Each of the assessments will adopt a set format for a degree of uniformity and fairer evaluation. The assessment criteria as follows [but again we are happy to take suggestions from our subscribers]:-

The editors are thinking of starting with Gordon Murray but will be influenced by our regular subscribers. The editors have been influenced by “The Art of the Formula 1 Car” but aesthetics alone will not influence inclusion.

Gordon Coppuck has an interesting overlay with Chapman/ Lotus as they competed against each other in various racing classes. Both had some excellent drivers/World Champions.

Coppuck may not have contributed to the McLaren M9 four wheel drive but overall the teams overlapped and on occasions went into the same design cul-de-sac.

“The elegant M7A tends to be mistaken for the first single seater McLaren that was designed specifically for Formula 1, doubtless because it was the first to succeed. It was another product of the fruitful Robin Herd/Gordon Coppuck pairing.”

Gordon Coppuck from the net:-

“Gordon Coppuck (born 8 December 1936 in Fleet, Hampshire)[1] is a British racing car designer who was chief designer for McLaren and later worked for March and co-founded Spirit.

Born in December 1936, he attended Queen Mary’s School for Boys before becoming an apprentice at the National Gas Turbine Establishment (NGTE).[2] In 1965 he followed his ex NGTE colleague Robin Herd to McLaren, working as his assistant.[3]

In 1971 he became chief designer at McLaren, responsible for various models including the Indianapolis 500 M16 and world championship winning M23.[3] When McLaren merged with Ron Dennis‘s Project Four in 1980, Coppuck departed, rejoining Herd at March.[3] The following year he founded Spirit with March’s Formula Two team manager John Wickham.[3] Spirit raced in Formula Two and then Formula One before Coppuck returned to March.[3] [4] Coppuck’s relative Frank Coppuck is also a racing car designer. [3

And slight repetition/emphasis “Coppuck departed to join his old friend Robin Herd at March Engineering. He designed an IMSA sports car for March, worked briefly on the ill-fated RAM March F1 project and did the groundwork for a March Indycar. In the autumn of 1981, however, he joined forces with March’s F2 team manager John Wickham to establish Spirit Racing. The team ran in F2 in 1982 but soon began preparations to enter F1 with Honda engines. Wickham and Coppuck knew that the engines would go to Williams in 1994 but hoped that they would be able to survive without Honda. The team did not and Coppuck went back to March where he designed Formula 3000 cars until 1987 when Herd began planning a new F1 program. When Adrian Newey was taken on as chief designer Coppuck transferred to the Porsche CART program and achieved some success with Teo Fabi‘s victory at Mid-Ohio in 1989. The program ended in 1990 and at the end of the year Coppuck joined forces with some of his colleagues to establish a design consultancy business called Adrem, which was based in Bicester. In 1991 and 1992 he helped the struggling Leyton House F1 team and then went to America in 1993 and 1994 to engineer Mark Smith in CART. He joined Arciero Wells in 1995 as technical director. Gordon’s relative Frank is also an F1 designer.”

Nye observes regarding the M23:-

“……….They decided to build a properly-integrated, tailor made monologue to optimize their long-held tenets of strength, practicality, simplicity and quality workmanship “

For a period there was also considerable shared input into the design process. 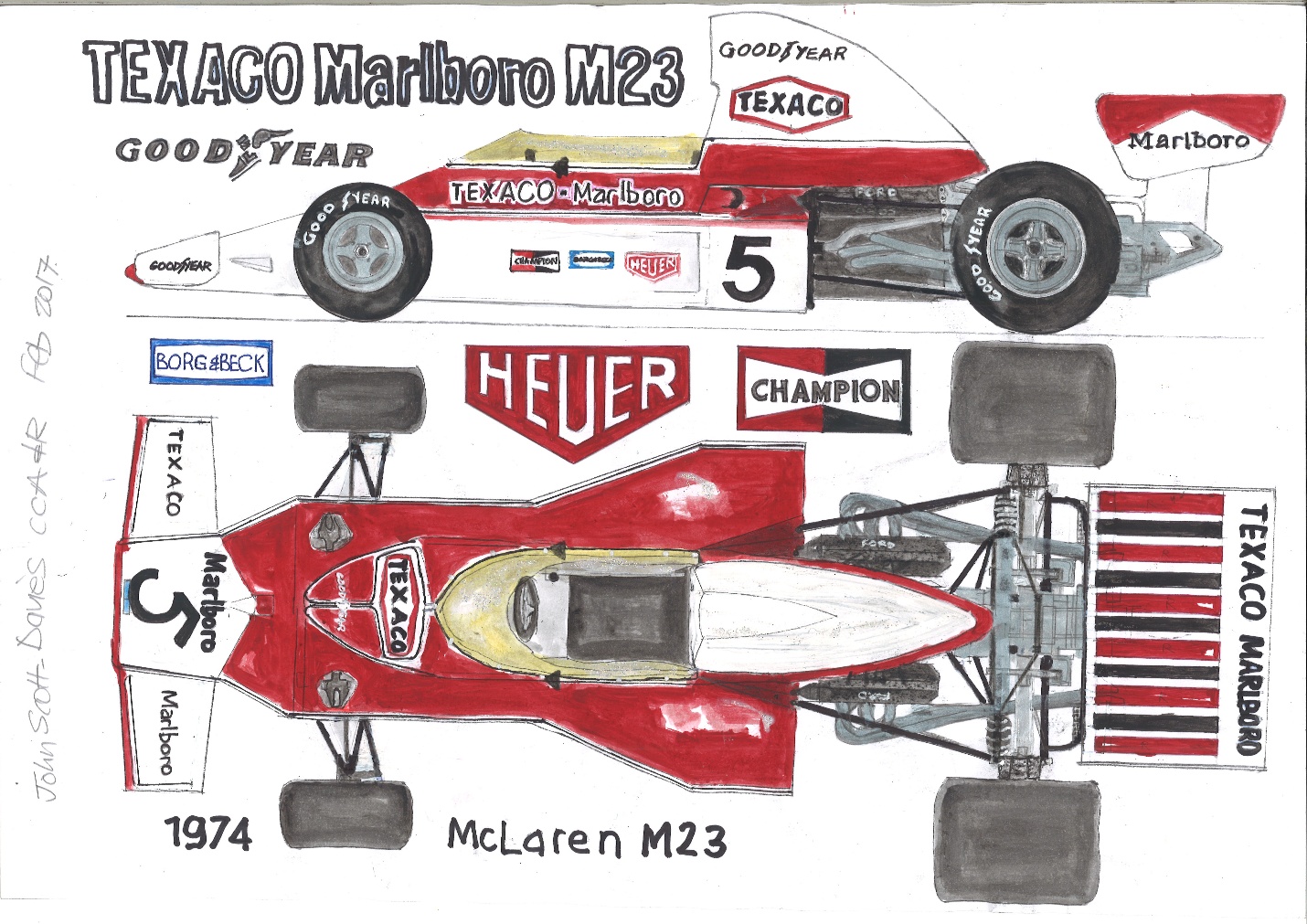 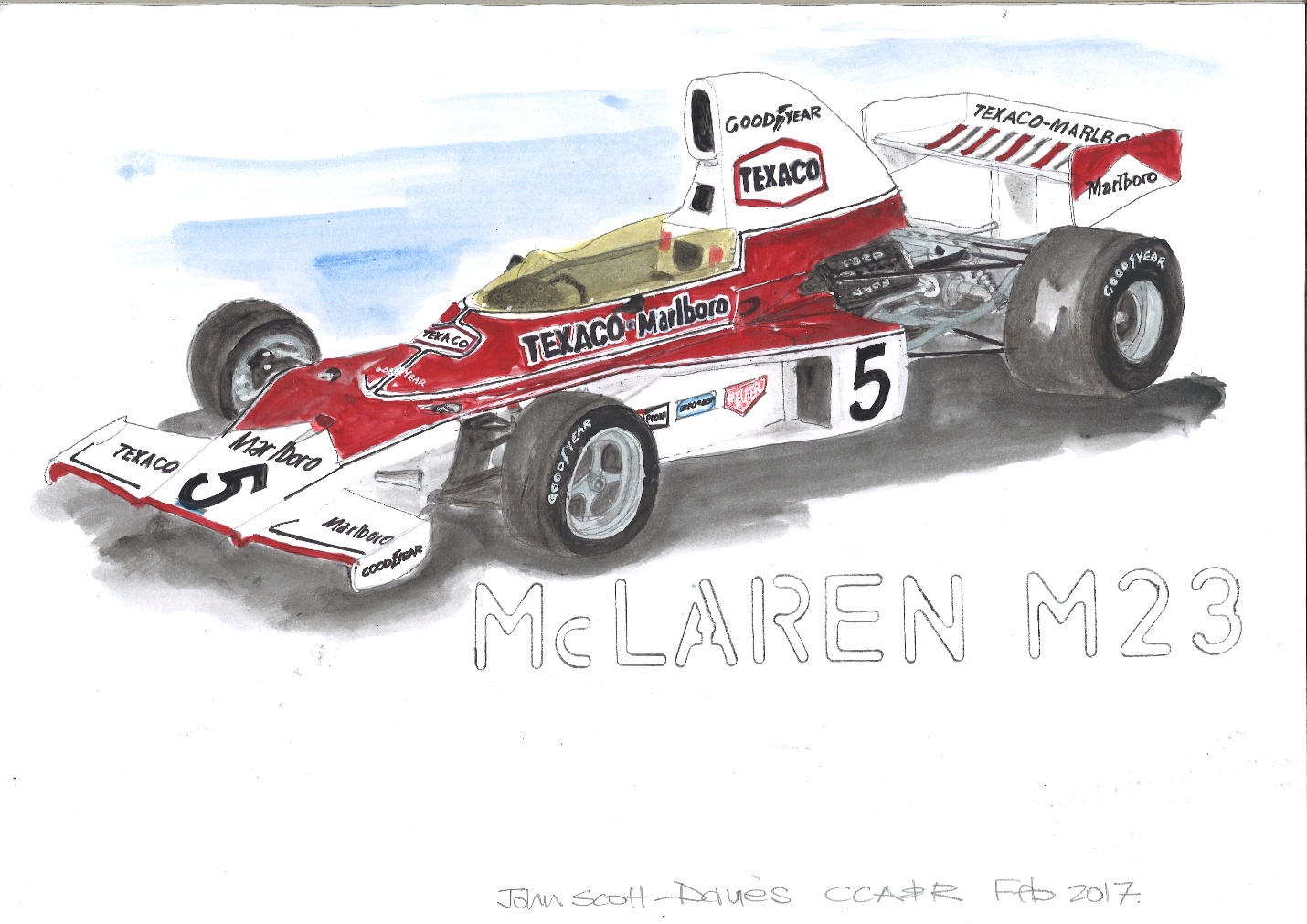 “The M8D differed visually from the M8B. With new rules banning the strut-mounted wings that had proliferated in 1969, the solution at McLaren comprised a pair of tail fins which acted as fences to channel airflow over a wide, low-mounted wing located eight inches above the rear bodywork. The distinctive appearance earned the car the nickname ‘the Batmobile’. It was less efficient aerodynamically without the M8B’s high wing, so to maintain performance the team sought even greater horsepower. A new deal with Reynolds Aluminium gave it access to that company’s new silicon-aluminium Chevrolet blocks, 8-litre versions of which were said to be capable of producing 700bhp. In the interest of reliability a slightly smaller 7.6-litre was chosen, giving 670bhp.

“Outstanding Can Am cars

Gordon Coppuck designed the McLaren M8F for the purposes of competing in Can-Am racing. The Chassis was comprised of monocoque and a Reynolds aluminum body. The Group 7 8360 cc alloy Chevrolet V8 engine was capable of producing around 750 horsepower. A 72 gallon fuel tank was dispersed on either side of the driver. Packed in rubber cells and padded with layers of foam, it added to the distribution of weight throughout the vehicle improving braking and handling. A Hewland LG500 MKII transmission helped disperse the horsepower to the rear wheels. The aerodynamics of the body and the wing created over one and a half tons of downforce, which kept the 1850 pound vehicle firmly planted on the track at speeds. In 1971 Peter Revson drove a McLaren M8F to the Can-Am championship where he emerged as champion after winning eight of ten races. This meant he was the first American to win the title. His teammate Denny Hulme finished second. This would be the final year for the McLaren dominance in Can-AM racing.”

“In 1969 the championship grew to an 11 –race series with a prize fund in excess of one million dollars.The McLaren team won every single race between them , bringing back to England a very large portion of the prize money “

Gordon Coppuck described the car as a decade and a half on as, “The best F1 car for three years. Yes, it was a good design, but it also benefited from a lot of good development. The chassis changed very little, but we did a great deal of suspension work to keep it competitive. The chassis was much stiffer than those of our rivals’ cars, but it was pretty flexible by modern standards.”

Compared to the previous season the M23’s weight distribution had been improved by fitting a new bellhousing spacer between the engine and gearbox, hence the three-inch longer wheelbase. With an additional two inches of track, traction was also improved out of slow corners, while the rear wing was brought forward by 10 inches in order to comply with a new set of regulations. During the season three different wheelbase variations were employed, together with a distinctive narrow ‘winkle picker’ nose which saw service at Brands Hatch, Jarama and Monaco where its wider wings generated more front-end downforce.” 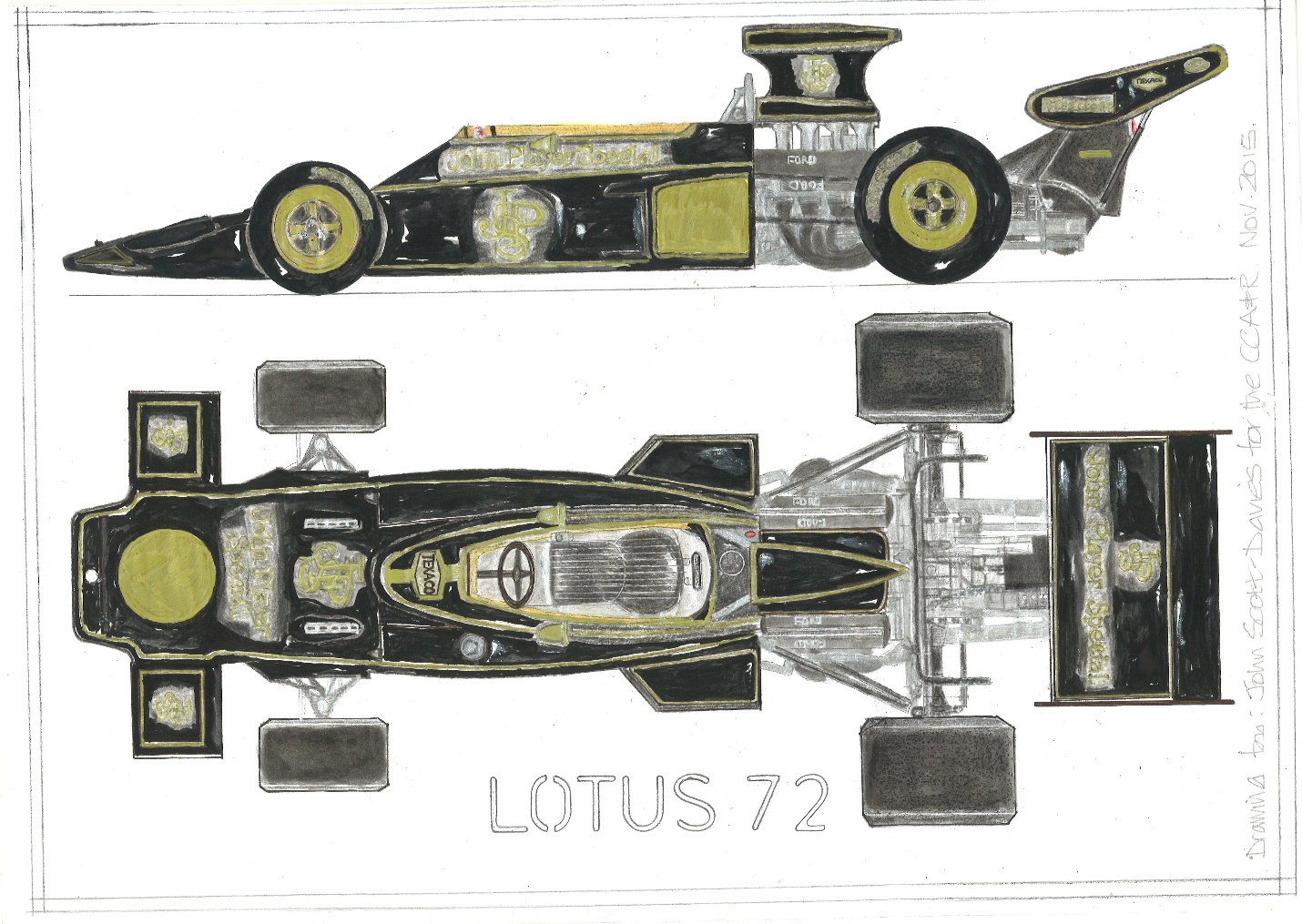 Figure 4. Editors part working drawing of the type 72 against which McLaren competed 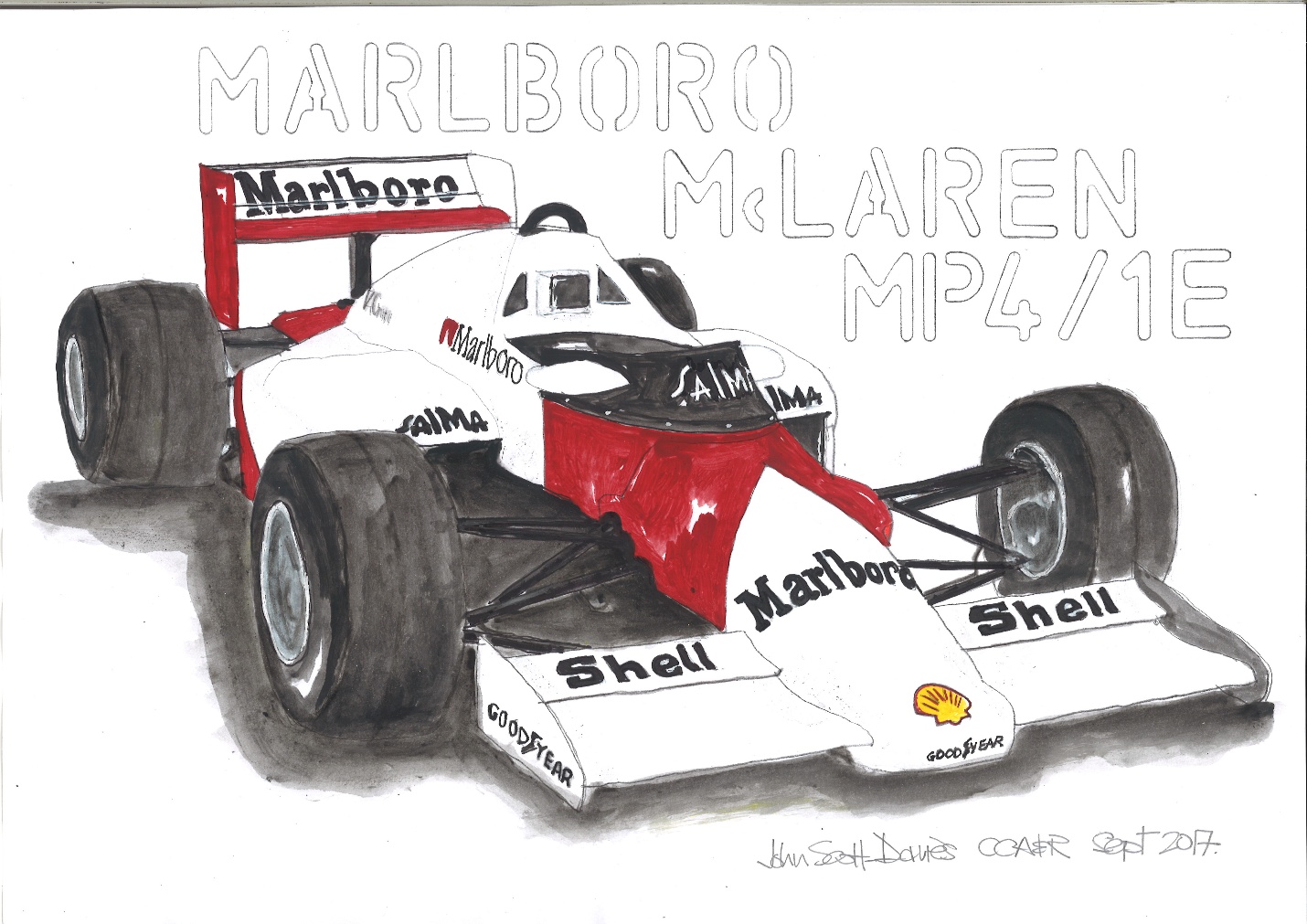 In this instance we suggest the following exhibition generalized F1 titles might be appropriate:- 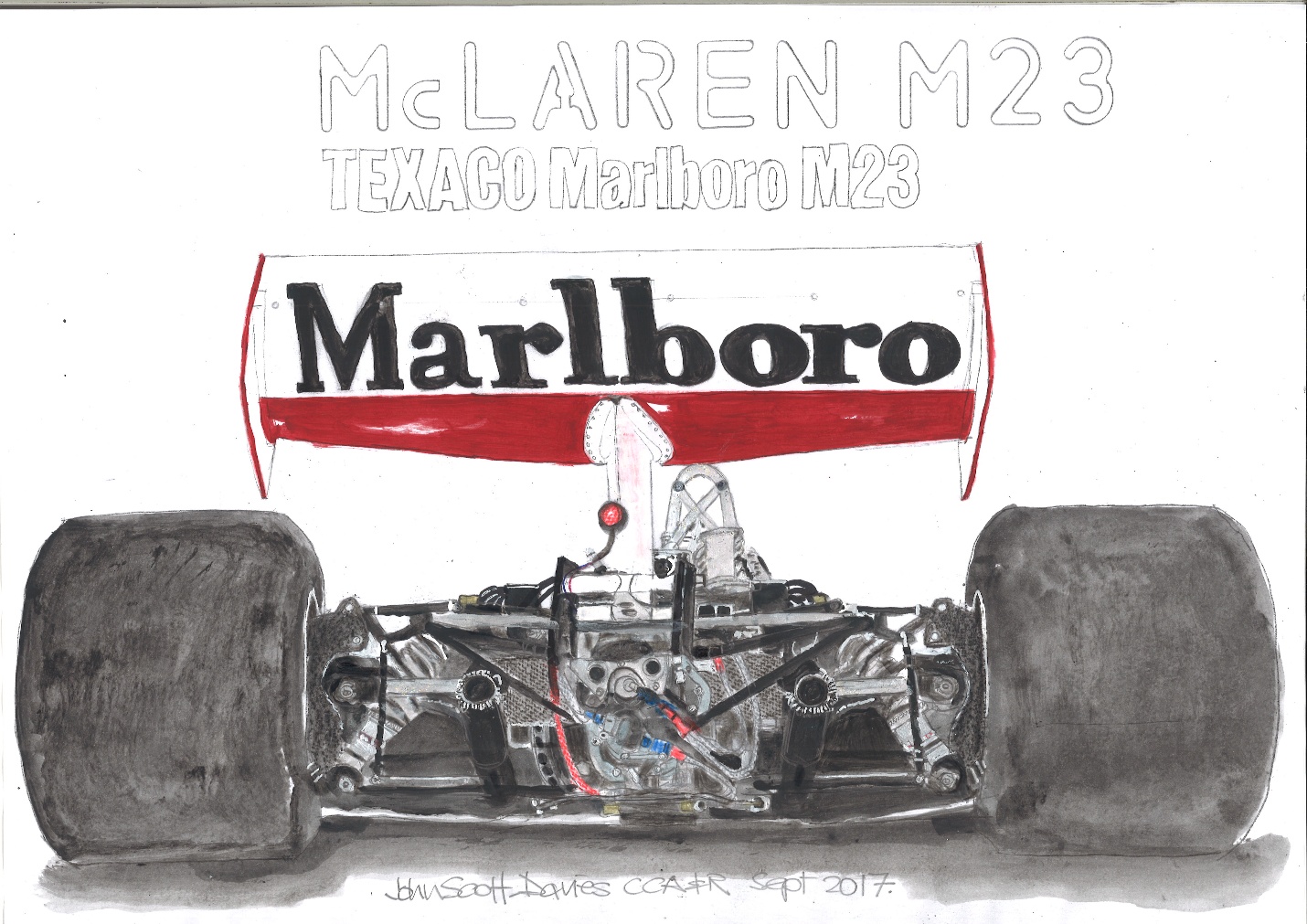 Figure 6.Editors sketch of direct view of rear of the M23

Exhibitions could tap into the rich diversity, explore communality and divergence, innovation v caution and place peer designed cars in juxtaposition with one another surrounded by the design principles the respective designers have adopted. This along with race simulators and film ought bring out and provide educational opportunities for students to comprehend how differing design approaches and content have impacted on success.

This series of benchmarking we hope will extract a meaningful “compare and contrast” approach that we believe will be both entertaining and educational. Furthermore we hope that they might provide the backbone concepts around which successful exhibitions can be formed.

Britain has a rich seam of FI drivers and design engineers but a benchmarking exercise will allow us to examine the international dimension too.

Gordon Coppuck is one of the few designers that have excelled at diverse branches of motor sport including:

The last two being American based were extremely lucrative.

There is some evidence that Coppuck benefited from Lotus/Chapman concepts.

The production of customer cars we believe contributed to extremely practical design- which benefited the McLaren F1 team.

“Behind every successful organisation there is always one, if not more leading figures who eschews the limelight in McLarens case, this was Gordon Coppuck. He stood almost permanently in the shadows of the other extrovert members of the team, and yet he more than played his part………

The design tradition at McLaren was unlike that at Lotus where one leading personality profiled….

“Over a remarkable career spanning four and a half years as a front line GP car ,the M23 won 17 GP’s…….in this respect the M23 ranks along side the Lotus 72 and McLaren own Barnard –designed MP4 cars for competition longevity……….”

” Gordon falls somewhere between the original nice guy and the archetypal boffin but do not be fooled by the quite manner ,here is one of the most successful of the GP designers .Furthermore his string of successful designs in other categories of racing [Can-Am ,F5000 and USAC]is virtually unrivalled , giving Coppuck a unique place on motor racing history.”

Coppuck had a prodigious talent that may have been perhaps underestimated.

Although we don’t believe he had the same depth and breadth of Chapman he was both commercially and competitively successful at McLaren.

We invite subscribers to complete the benchmark exercise with Chapman set out in the appendix below.

The Perfect Car. The biography of John Barnard.Skeens.Evro.2018.

History of the Grand Prix Car.Nye.Hazelton.1992.