This article is a consequence and inspired by : –

We might comment that what goes around comes around and a number of specialist’s manufactures have recently readopted motor cycle engines to power their cars.

Subscribers might like to see the directly relevant and integrated A&R pieces that complement and help structure this article: –

“In September 1956 a delightful little miniature sports car made its debut .Capable of just over 60mph and returning fuel consumption of between 45-60mpg , it was very economical to run and fun to drive . The performance compared with other sports cars was disappointing, but the excellent road holding, in particular good brakes, high cornering power and a remarkably comfortable ride qualify the vechicle as a true sports car as any enthusiastic driver will soon discover.

Basis of the car is an unconventional punt-like chassis made of fibreglass . This has very wide and deep box section side members in the driving compartment with a footwell for the drivers and passengers’ feet

The chassis is extremely rigid and there is no scuttle shake, the body is a very attractive low built fully streamlined open 2 seater also moulded in fibreglass , with room for two adults and two children in a compartment behind the seats ………the car is and looks very small and the overall height from ground with the hood up is only 3ft.7 3/8inch……………

All round independent suspension is by Girling helical spring and telescopic damper units at the front located by unequal length wishbones, and the rear by swing axles. The engine and gearbox are mounted on tubular steel subframe and there is an aluminium alloy bulkhead between the engine and passenger compartment ……….

Weighing only 6.5 cwt the car can be driven to the limit all the time, the road holding characteristics being very similar to a Mini ……………the very short exhaust terminates under the engine and is noisy and tiring … on long journeys.

Spares for the engine and transmission are readily available through most motor cycle stockists , and are very cheap .

“At the time of its introduction at the London Motor show of 1956, the Berkeley was the smallest sports car then available ………the body was constructed of glassfibre, reinforced by aluminium –alloy bulkheads and cross members and independent suspension on all four wheels was provided by coil springs and wishbones at the front and by swing axle at the rear wheel base was 5ft-10 inches and track 3ft-8inches and total weight under 6 cwt …….”

From Posthumous and Hodges:-

“The little Berkeley were far from conventional, however much they may have looked like scalded-down normal sports cars, but in some respects were very effective in providing low-cost sporting motoring.the ingenious front wheel drive by Laurie Bond had strong motor cycle associations, and the cars were built by an established caravan manufacturer who made good use of experience with plastic construction.

Introduced in the autumn of 1956, the car comprised three main glass-reinforced polyester resin mouldings [nose, pontoon under section and tail], bolted together and reinforced with alloy members, there was no chassis as such, merely a steel sub frame linking engine, transmission and bulkhead………..

Outwardly the body changed little in its life of under five years; wider doors came after a year as did flamboyant wheel trims, while the oval grill gave way to a larger square aperture,a hard top was added to the range in 1957………….

The assemblage was a little temperamental, and drivers had to learn its quirks as well as endure vibration and noise but there was normally safe handling and flat cornering, while acceleration matched top speed.

The little Berkeley’s offered economy, exhilaration, but they were too far removed from the motoring mainstream to enjoy any lasting success and the company faded away at the end of 1960” 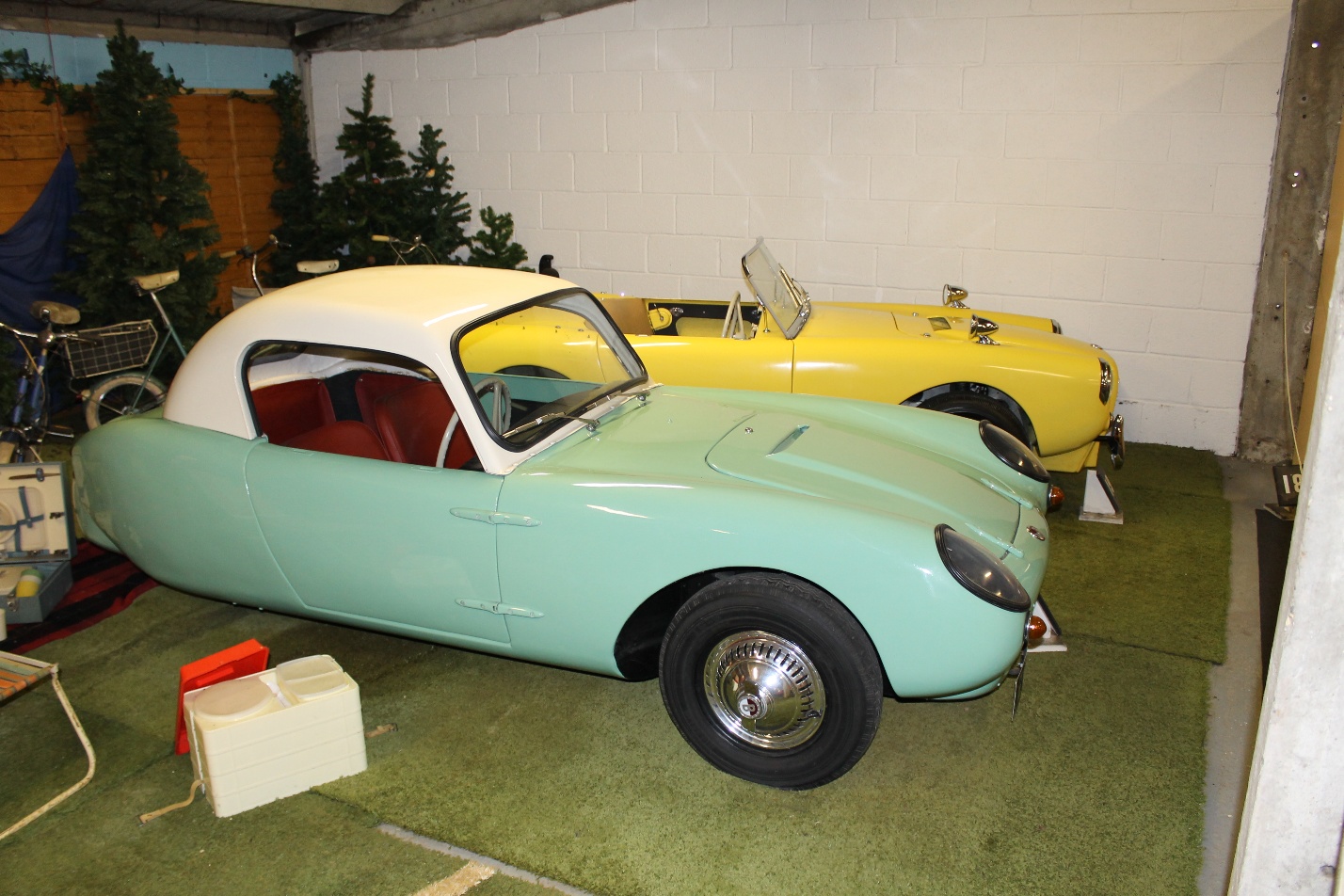 “The Berkeley originated with the desire of well-known caravan company of that name to enter the motor business. They evolved a tiny fwd. Two stroke sportscar from Laurence Bond’s designs made largely, like the Elite of plastic and laid down a production line at Biggleswade where Berkeley’s were turned out in considerable numbers.

The road holding was a good feature, the noise and temperament of the 3-cylinder two stroke power unit less attractive …….

……”as the car weighs only 7.5 cwt these engines propel it in no mean fashion ……….the fibre –glass structure is reinforced by alloy members and is of the true chassis-less construction …

At the 1960 Earls Court Show the Berkeley Bandit was shown, a new model built around ford 105 E components “

“This little car was conceived in England at a time when the economy was beginning to boom, when demand for interesting new cars was rising all the time, and when there was something of a dearth of small –engine British sports cars ………….the Berkeley was designed ……..by Laurie Bond, whose most notable product up to that time was the front-engine front drive three wheeler which carried his name ……….

Berkeley Coachwork Co. were skilled in the use of glass –fibre, so it was to be expected that their four wheeler sports car would have a platform hull mainly of that material with sheet aluminium stiffening, to which a tiny two seat shell was bonded on assembly ………..the hole car was tiny [it was only 10ft –3inches long and weighed a mere 700lb] but the performance as still restricted ……………

Although the Berkeley certainly had a great deal of the elusive substance called “Character” this could not overcome its twin disadvantages of the noisy engine and relatively crude specification and equipment level .it was after all, nearly as expensive as the Sprite ……….

“Berkeley were in trouble by 1960.They made an attempt to retrieve the situation by showing a prototype of the Ford engine “Bandit” model, which was mechanically very different, but nothing became of this and the last Berkeley was built in 1961”

“The Berkeley automobile was a collaboration between designer Lawrence “Lawrie” Bond and the Berkeley Coachworks factory owned by Charles Panter, which at the time was one of the largest manufacturers of caravans in Europe.[1] It was an ideal project for Berkeley, who had developed considerable skills in the use of Glass-reinforced plastic [2] (GRP), and were looking for something to fill the gaps in the very seasonal caravan market. What Panter and Bond wanted to achieve was “something good enough to win World 750cc races… but cheap, safe, easily repairable and pretty.”[3]

The early cars were an immediate success on the home market, and several derivative models were spawned over the four years of car production. Export markets, most notably the United States, were exploited and the cars earned a reputation for fun, if fragile, sports motoring on a budget. Recognising the threat posed by the newly introduced Mini and Austin-Healey Sprite in the late fifties, the company started to develop are a more conventional model with the support of Ford.

The caravan market collapsed towards the end of 1960, and Berkeley’s poor cash flow forced the company into liquidation on 12 December 1960, taking its car manufacturing activities with it. After having produced about 4100 cars of various types, the workforce was laid off shortly before Christmas that year. An attempted sale of the company to Sharp’s Commercials Ltd (manufacturer of the Bond Minicar) came to nothing, [4] and the company’s assets were liquidated in 1961.

The factory was later used by Kayser Bondor Ltd to make women’s underwear, but it was demolished in 2002 and the site turned over to housing. A road named ‘Berkeley Close’ in the housing estate provides the only obvious link to the car factory.

Today there is an active owner’s club (the Berkeley Enthusiasts’ Club), which provides a range of parts and services aimed at preserving the remaining few hundred cars known to survive worldwide.” 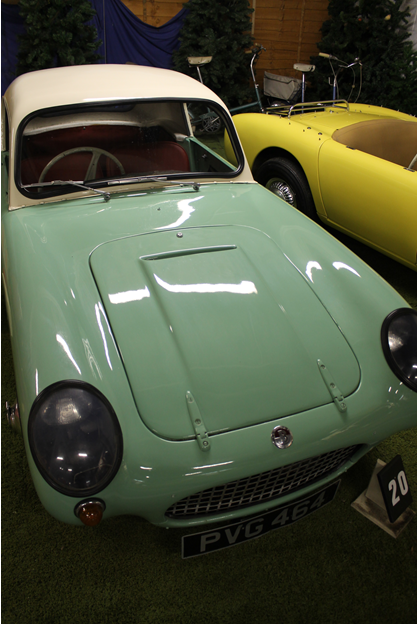 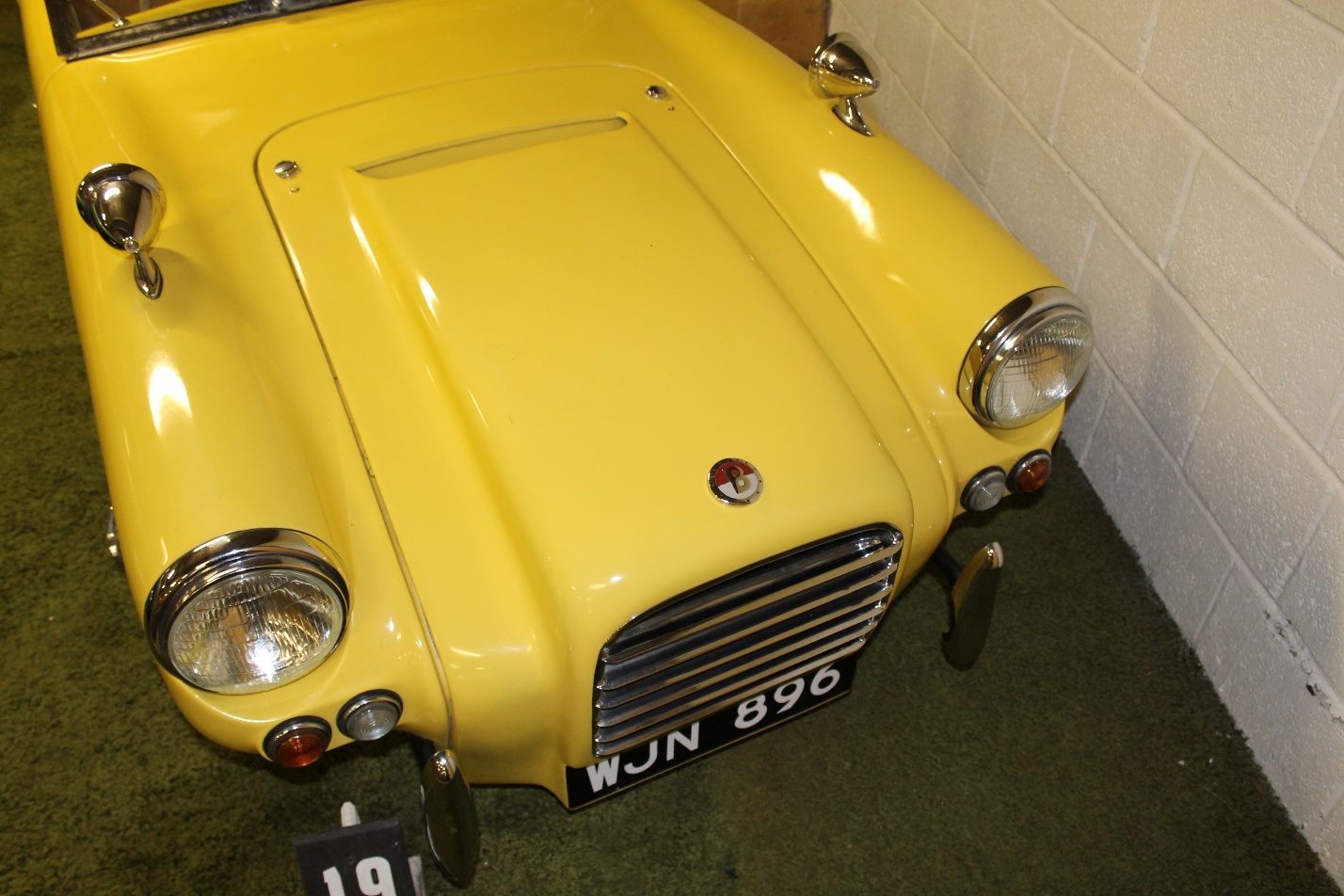 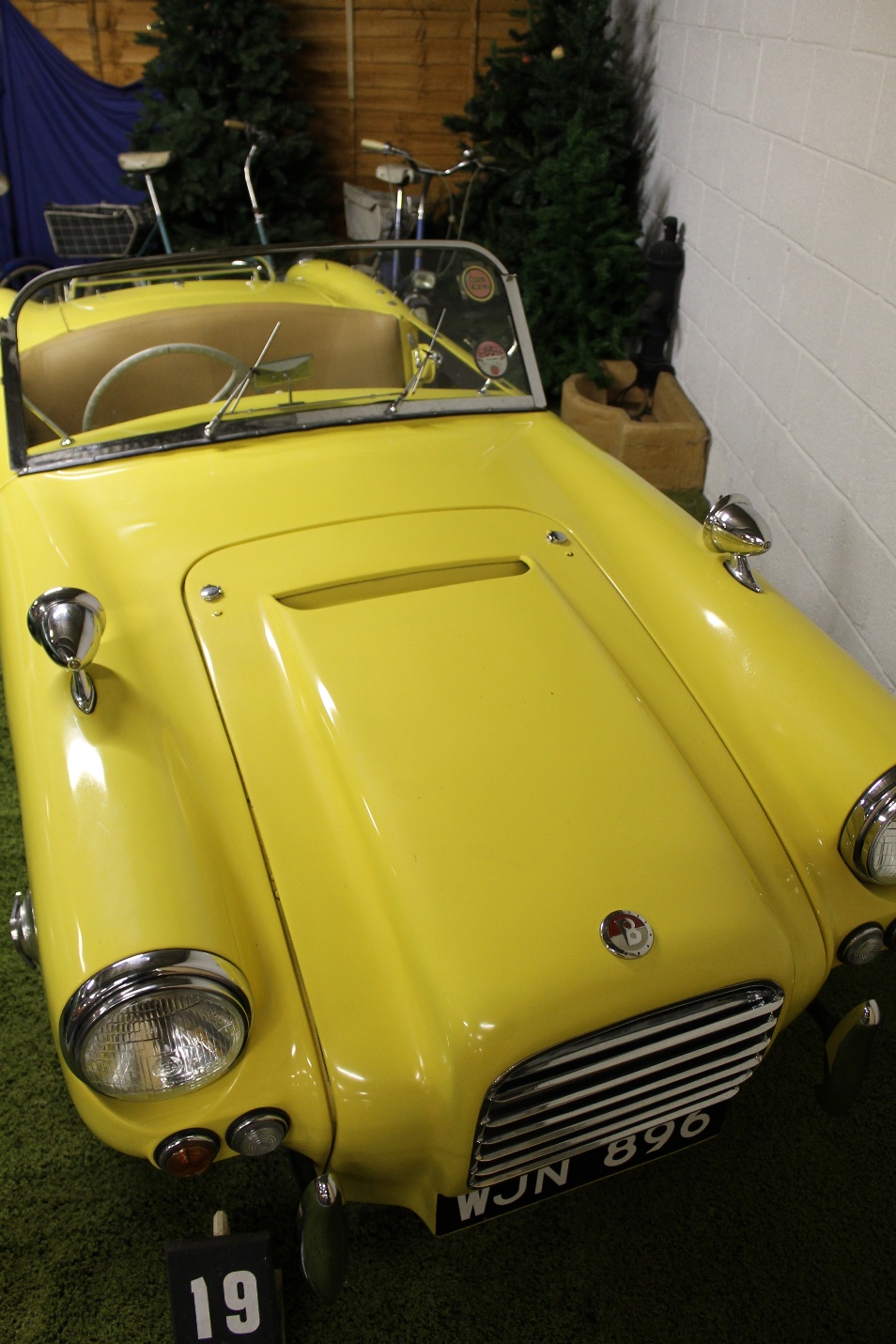 The gear lever is floor mounted, the change being made in a straight –through movement, motor cycle style .it has extremely attractive lines and all-weather equipment ………at brands Hatch one of these little cars lapped at an average of 58.28 mph establishing a 350cc lap record and demonstrating its extreme roadworthiness and handling properties in recording an average speed very near its maximum

As produced for the home market, the Berkeley has its headlamps fitted behind acetate fairings incorporated into the front wings. For export to the US the lamps are mounted on stalks above the wings, due to the American lighting restrictions on height” 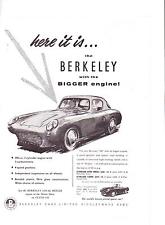 For these reasons our suggested outline Business Plan includes provision for promoting products and services which share Chapman’s ideals of mechanical efficiency and sustainability. In addition, we propose merchandising that explain and interprets the social and cultural context of Chapman’s designs in period. It’s suggested there will be catalogue for on line purchasing.

The A&R has produced a series of near forensic examination of Britain in the fifties. We have done so to provide a better means for analysing and interpreting Chapman /Lotus achievements in context.

Our conclusions here can be relatively brief and are partly covered in the articles mentioned.

They did so to meet popular demand. This was not an easy task as the affordability was a major concern.

Motoring and mobility / freedoms was a growth area and several manufacturers attempted to diversify into this field; often responding to European entry to market [ see Vespa for example].

Laurie Bond was gifted designer whose name had a reputation. To Berkeley he brought this publicity, experience, driver skill feedback and momentum plus contacts within the industry. The Berkeley might be considered as an upgraded or advanced Bond – with its sporting pretentions perhaps focused to a younger audience – but still cost conscious.

The concept was honourable and the business plan reasonable.

However, in a free market these relatively small specialists were in competition with mass producers, economies of scale from both home and abroad.

Towards the end of the 1950’s several major events coalesced:

These tended to overtake the specialists.

Although perhaps overlooked; the specialists had very honourably attempted to mobilise the low income in their incorporation of radical specifications .They also continued to innovate and offer new products

In the case of Laurie Bond and Berkeley they possibly inspired or informed Chapman to be even more ambitious and to conceive the Elite. When forensically examined this car like some of the specialists mentioned suffered commercially against a more conservative but significantly cheaper mass-produced mainstream. Chapman like Bond possibly believed they could produce superior products at lower cost.

Both Bond and Chapman would learn from experience. Both produced further cars –The Bond Equipe and Lotus Elan [ see dedicated article on Bond for fuller analysis]

The microcars of the 1950’s have a relevance today in their addressing of fuel economy and sustainability and as such deserve study. Its worth noting too how manufacturers like Caterham have almost returned to the 1950’s with motor cycle engines for a similar basket of motives.

Racing Cars of the World. Roberts.Longacre.1962.

Please note the editors of the A&R attempt to give the broadest spectrum of references but not all are available for consultation in an article. However, by noting their existence it may assist students in their research.